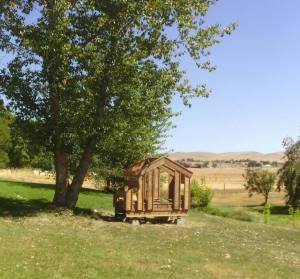 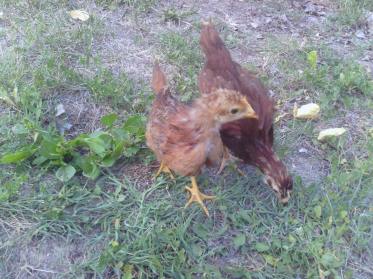 Over the next few days, the baby chicks settled into their new environment. Every morning, the girls and I would wake early and head to the garage to check the chicks in their brooder. We would take turns holding the chicks on our laps and smile as they dozed off in the cups of our hands. We checked the thermometer faithfully, adjusting the height of their heat lamp so they wouldn’t get too hot or too cold. Since it was summer, it was quite warm in the garage, and I often felt like I was going to fall asleep myself.

We tried out names for the chicks, and finally settled on Chickaletta, Henrietta, Cinnamon, Ariel, Rossa, Apple Bloom and Midge. At first it was fairly easy to tell them apart with their names. Chickaletta was a deep reddish-brown, Apple Bloom had a dash of white on her chest and Midge had the shape of a small triangle on the top of her head. It was our idea that we would band the little chicks to ensure we could always call them by their names. Unfortunately, the farm supply store was out of small bands, and after some time, we forgot to get them.

The chicks grew quickly, and gradually it became harder to tell them apart. I am sure I still know who Apple Bloom is. She was typically the first one to greet us from the top of the brooder, climb up one of our arms and perch atop one of our shoulders. Apparently she was very curious about earrings as well, and perching on my shoulder gave her a much better view! One morning, with lightning speed and great precision, she pecked my ear. The girls’ eyes grew wide, and Aviah exclaimed, “She ate your earring!” From then on, I had to keep a close eye on her as well as my ears! To this day, there is one hen that will come and stand close beside me. She loves to be held, and she still stares at my ears. I believe this is Apple Bloom. The other chickens are now collectively called, “here honey”, “here chick-chicks” or “here girls”.

As the chicks grew with greater intensity, Jonathan began working on the chicken coop more intensely. When they were around five weeks old, we began bringing them outside during the late afternoon and cool of the evening. This allowed them to roam freely and enjoy the fresh air while we helped Jonathan with the coop. We laughed as the chicks chased each other or argued over a piece of food; chickens are highly entertaining! Eventually, it was time for all seven chicks to make the move into their brand new coop. Used to the security and coziness of the brooder, they were a little uneasy with their new home that first night. However, it didn’t take long for them to realize they now had more space which included larger perches, larger water and food dishes (4-H approved, no less!) and a window that allowed them to gaze into the night sky. Yes, this was the life!

Now as we watch them forage peacefully while the sun sets, quietly murmuring as they make their way back to the coop, I think we all sigh a contented sigh. Yes, this is the country life, and it’s lovely. 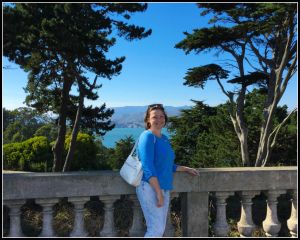 Welcome to Life Bellissima, my blog on family, organic recipes, country living and God's many blessings! My family and I make our home in Southwest Idaho with chickens, rabbits and our tabby cat, Marcie. I'm so glad you've come to visit -- you're always welcome! ~ Anna